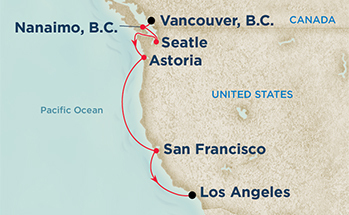 
Prices and itineraries are subject to change.

You will visit the following places:

San Francisco, officially the City and County of San Francisco, is the financial, cultural, and transportation center of the San Francisco Bay Area, a region of 7.5 million people which includes San Jose and Oakland. The only consolidated city-county in California, it encompasses a land area of about 46.9 square miles (121 km2) on the northern end of the San Francisco Peninsula, giving it a density of about 17,179 people per square mile (6,632 people per km2). It is the most densely settled large city (population greater than 200,000) in the state of California and the second-most densely populated large city in the United States after New York City. San Francisco is the fourth most populous city in California and the 13th most populous city in the United States, with a population of 805,235 as of the 2010 Census. The San Francisco-Oakland-Fremont metropolitan area has a population of 4,335,391.

Los Angeles, Spanish for "The Angels", is the most populous city in California and the second most populous in the United States, with a population of 4.06 million on a land area of 498.3 square miles (1,290.6 km2). It is the focal point of the larger Los Angeles-Long Beach Riverside  combined statistical area, which contains nearly 17.8 million people. This makes it the 12th most populous metropolitan area in the world. Los Angeles is also the seat of Los Angeles County, the most populated and one of the most multicultural counties in the United States. The city's inhabitants are referred to as "Angelenos".

Terms, conditions and restrictions apply; pricing, availability, and other details subject to change and/ or apply to US or Canadian residents. Please confirm details and booking information with your travel advisor.

Preserving the World's Heritage: One Cruis...