Journey to the Great Barrier Reef — Exploring the remote Whitsunday Islands, off the east coast of Australia

Australia · About Adventure
By Tim Johnson
Everything about this feels epic. Floating on a pontoon anchored in a deep-water channel, a slash of flowing dark cobalt slicing through the coral, I’m on the outer edge of a living organism that’s approximately the same size as some countries – big ones, like Japan, Italy, Germany. They say you can see it from space, and right now, the sky above is lighting up with great intensity as the last of the sunshine fades. My bed is made. My swag is ready. With no horizon in sight, suspended here some 72 kilometres from shore, I prepare for a night of sleeping on the reef, a million stars shining above, nothing but the blue below me, and completely surrounded by one of the greatest natural wonders on earth.
I’m visiting the Great Barrier Reef near the Whitsundays, a string of 74 islands hanging off the northeast corner of Queensland. It’s a place that lends itself to superlatives, a part of Australia that remains wild, and wonderful. Whales breach just offshore, while the waters swim with sharks, manta rays, turtles and dolphins, alongside a subaquatic swirl of tropical fish, feasting on the abundant coral. The rainforest is intensely dense, and the beaches are so white, and fine, that everyone I meet tells me that it was specially selected to make the glass in the Hubble Space Telescope (I don’t know if that’s true).
My journey began on Hamilton Island, the largest inhabited island in the Whitsundays. A little over two years ago, a Category 4 cyclone named Debbie ripped across this region – the hotels on Hamilton were some of the first to reopen. Less-known internationally, Hamilton is nonetheless famous across Australia as a sort of fabled paradise, a place apart, an island where everything moves a little more slowly under the sun.
With private vehicles prohibited, I spend the next few days scooting up and down the island’s hills in my own little golf cart. Staying in a private villa on the secluded northern tip of the island, my floor-to-ceiling windows take in sweeping views of the blue sea and green islands outside, my living room opens to a spreading deck and a cool plunge pool. I dine on Australian-South Pacific fusion, get a massage in a spa surrounded on every side by the rainforest and spend an evening enjoying a Champagne sunset cruise, one hand steadying myself on the luxury yacht, the other firmly gripping my glass as we roll through the golden light.
And then I head to the skies. Parking my golf cart in a tiny parking lot, I’m picked up at an unmanned seaside helipad, doubtful that I’m in the right place until the black, two-person chopper drops down onto it; the stoic captain, a man named John, beckoning me through the rotor wash to strap in, and take off. Within seconds, we’re high over the islands, taking in the radiance of Whitehaven Beach, a seven-kilometre sweep of sand. I repeat that I’ve heard, several times, that this is the source of the sand used to make the Hubble Telescope’s glass. “I’ve heard that rumour, too,” John says matter-of-factly into the headset. “But I’ve never had it confirmed.”
We head toward the horizon, leaving the islands and the mainland behind, the unbroken plain of the South Pacific below us, John telling me that 15,000 years ago, the Great Barrier Reef was a coastal plain. When sea levels rose, it became what it is today – approximately 3,000 individual, interwoven reefs and some 900 islands stretching 2,300 kilometres, tracing the Australian coast.
Soon, we see it, the monochrome of the navy ocean becoming a kaleidoscope of patterns and colours, the coral in clusters, and zigzagging in unpredictable lines, the earth tones of the reefs reaching like fingers into the turquoise waters in between. Even though he’s surely seen it many times, Captain John seems a little moved by the sight. “It looks like mountain ranges, one on top of the other,” he observes. 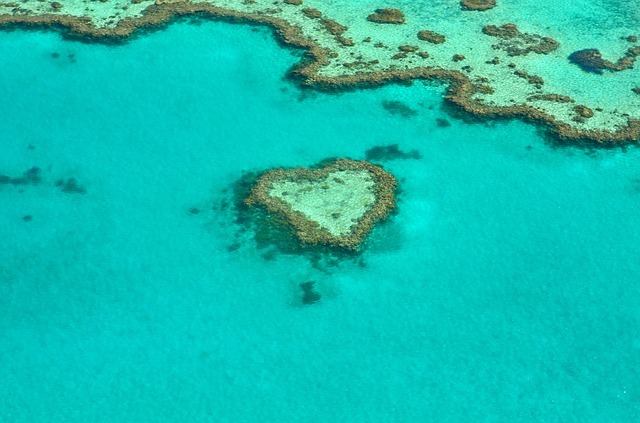 We pass over Heart Reef (its romantic shape, unmistakable) and then, a curious little cluster of boats, a pontoon, a catamaran and a submarine. Their white hulls and decks seem out of place in such a remote spot, so far from any other development with just the reef, and the ocean, all around it. I can see people walking around on top and tiny little dots of white in the water, visitors splashing around in the sea. Captain John tells me that you can sleep on the top deck.
A couple of days later, I’m there, having ridden on a catamaran for a couple of hours from Hamilton. We dock against the pontoon, and I start to explore. First, I take a ride in a semi-submarine, which makes 20-minute round trips from the pontoon, a guide named Tanisha narrating as we slip below the surface and past the reef. She notes that while it looks like rock, coral is actually a living being, and behaves a bit like an ant colony, polyps living behind a limestone skeleton. While climate change has damaged the reef further north, where the water is warmer, Tanisha says it remains in good shape here. She adds that the surrounding waters are a green zone, meaning no other development is permitted. Sharks, she says, are the apex predator here – mostly reef sharks, although she adds that a tiger shark will cruise through, on occasion.
About a dozen of us remain for the night when the boat back to the mainland leaves a few hours later, and then, I get in the water, at last fully engulfed by the remarkable ecosystem of the reef. At first, aside from Maggie, the massive Maori wrasse that hangs around the snorkel platform, the fish are small, tiny “bait fish” that move as one single organism, flowing this way and that. And then I see them, slightly creepy, dark, swimming slowly, together – a school of giant trevally, herding, and hunting, the baitfish. And then, a slash of silver, as a Spanish mackerel flashes through the middle of it all, hunting his own prey. 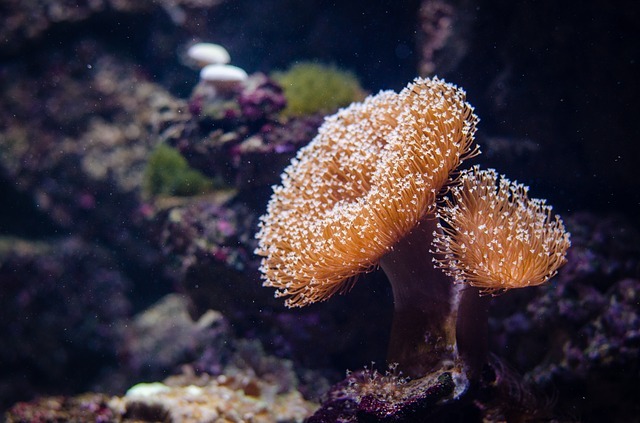 Soon enough, the day begins to fade. I join my fellow “reef sleepers” and hosts Katie and Gabrielle, who shows us how the coral changes once the sun sets, guiding us into an underwater gallery and narrating as the polyps open to feed. We feast, ourselves, on deck, sipping wine and dining on seafood and steak, before making our way to our swags, a traditional Australian bedroll. Ours is a little fancier than the norm, kitted out with flaps to close, like a tent, or leave open, so you can sleep under the stars.
Soon, it’s just me and the Milky Way. Down below, I know, the reef is still alive, swimming with life in every size. But for now, in the moments before I drift off to sleep in the tropical breeze, my eyes are trained up there, on the blazing skies.

The Hotel with the Best Views of Buenos Aires