Alaska · About River or Ocean Cruises

We decided to stay in Seattle the night before the cruise and chose The CourtyardMarriott Downtown/Lake Union. 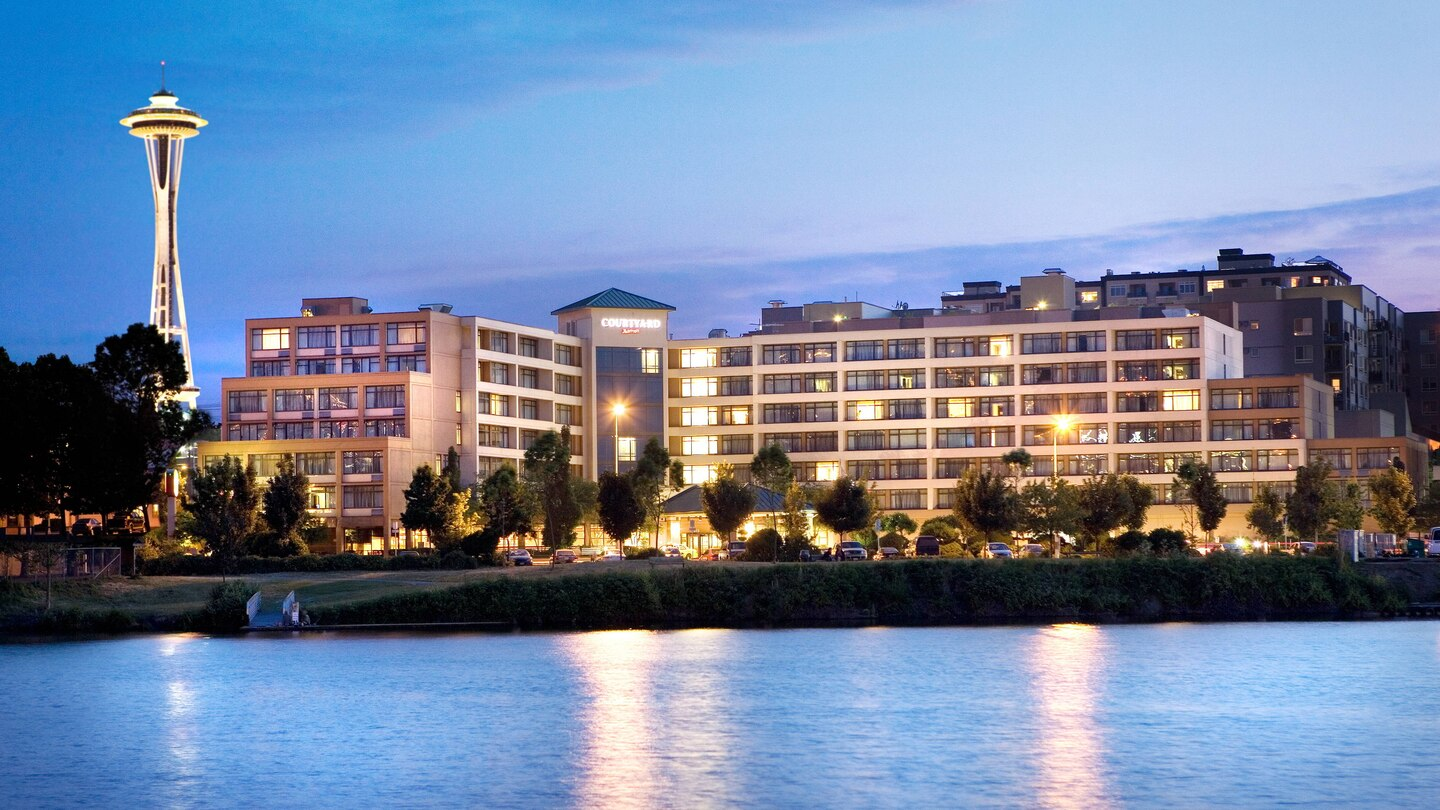 This property is well located for cruise passengers - overlooking Lake Union, about 3 km from the pier with easy access off I-5 via Mercer Street. The rates start at about US$200 per night - there are slightly higher rates that include breakfast. Internet is included for everyone. They offer parking at $25 per night for anyone wishing to leave their vehicle during their cruise.
We choose to park at the pier using Republic Parking Northwest (prepaid online) and take their included shuttle. Their lot was a little difficult to find with construction in the area. We arrived at the pier about 1:00 PM and found it very busy with a long line for check-in. We would suggest arriving a little later to avoid the hassle.
Once onboard, the ship was very familiar as she is a sister ship to ms New Amsterdam (about 2200 passengers) which we sailed on a year earlier. We sailed from Seattle at 4:30 PM for Juneau, Alaska. 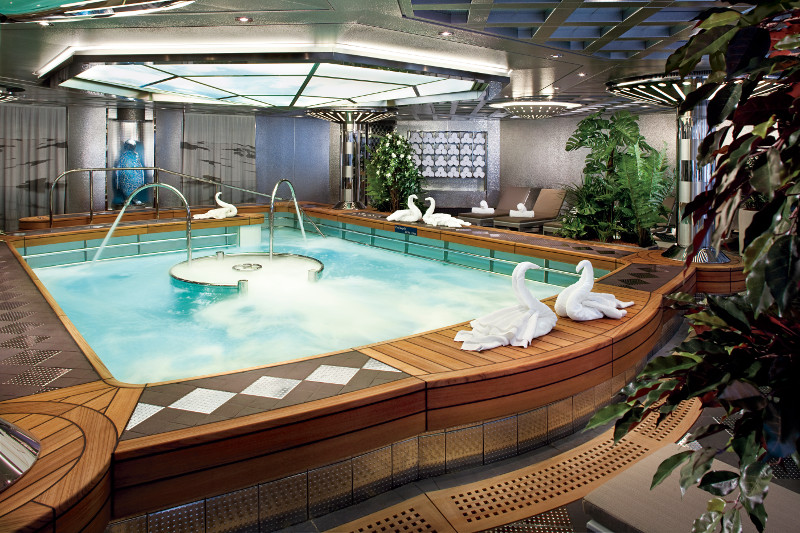 We were surprised by how many 2 and 3 generation families were on board. Lots of young children! This is one of the reasons we purchased a retreat package for the week (limited to 50 people). The retreat is an area in the Spa with a large whirlpool, saunas, steam rooms and a hotbed area - very quiet and relaxing! It works out to about $20 per person per day.
When we arrived for dinner on the lower floor (open dining) at 7:30 PM, we found the dining room entrance very busy - almost disorganized, as there was a large group (900) onboard and it seemed that many of them arrived at that time. However, the maître d' was very accommodating and quickly found us a table on the upper floor (set dining) that had not been assigned.
Our dinner was good but not outstanding. The portions were ample and the service was excellent. We had not purchased a beverage package so we bought a bottle of wine to be kept for us for the next few nights - quite expensive. It’s a good idea to bring a bottle or two onboard and take them to the dining room for a corkage fee of $18 - or leave them in your cabin with no fee. 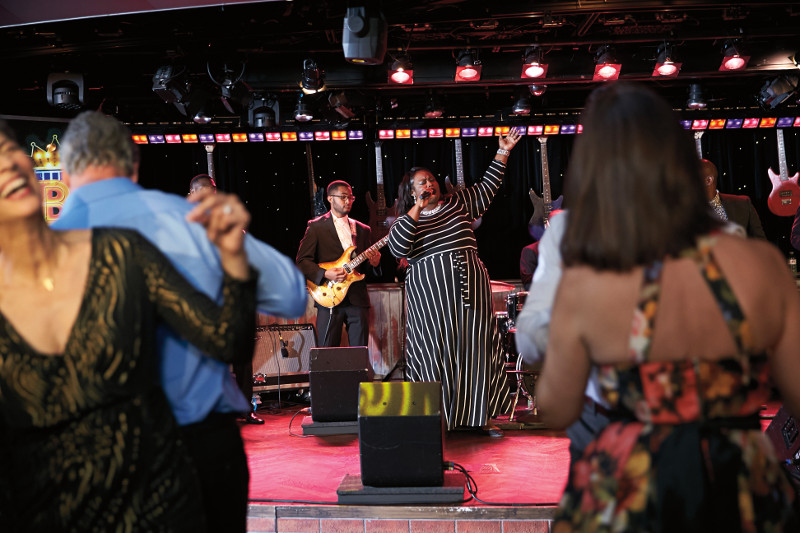 There was no “show” that night - just an orientation which we skipped. We explored the ship and stopped by “BB King’s” and “Billboard onBoard” for a few minutes to check out the entertainment.

Cruising north up the west coast of Vancouver Island. This is the main difference between a “Vancouver Roundtrip” and “Seattle Roundtrip”: the Vancouver departures cruise through the Inside Passage which generally calmer and certainly much more picturesque than the open ocean off Vancouver Island. However, the sea was calm and we enjoyed a late breakfast at the Lido Marketplace. We tried the omelet station and found them to be poor - not even sure they used actual eggs. 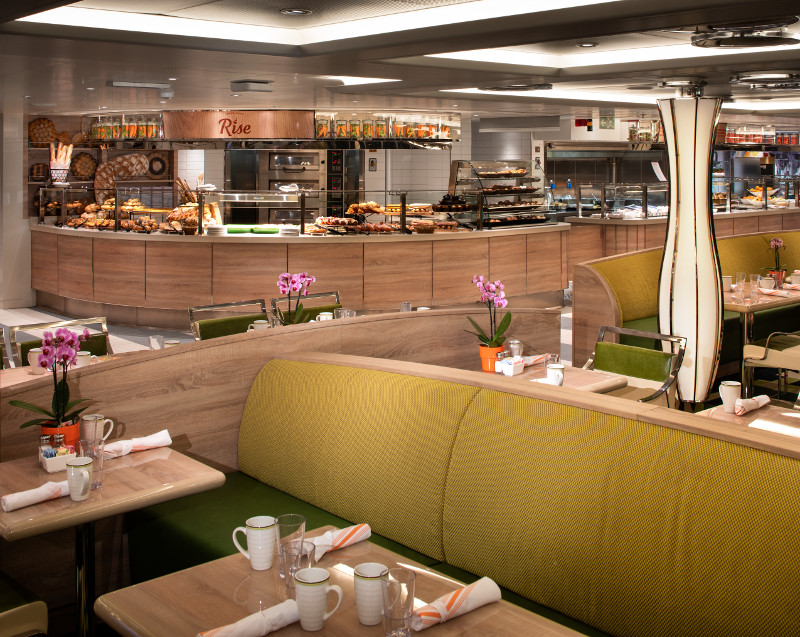 We enjoyed a leisurely afternoon around the ship and made sure all was in order for the Ensemble cocktail party we were to host that afternoon at 5:00 PM, as well as the Ensemble Private Excursion scheduled for Wednesday in Sitka.
The Ensemble cocktail party was held in the Tamarind Bar. It was attended by about 20 of our group and we enjoyed meeting them, answering questions about Ensemble and the private shore excursion in Sitka.
We dined at “Canaletto”, the Italian restaurant for which there is an extra charge of $15 per person. It is part of the Lido Marketplace, not a separate venue like you might expect. Although the ambience left much to be desired, the food and service were great!
That evening we watched a fabulous dance show on “Mainstage”. The 6 dancers were very talented and the accompanying light show was unreal - one of the best shows we’ve seen on a cruise ship!
After the show, we headed to BB King’s for dancing and entertainment. It was high energy and fun - not at all like Holland America “back in the day”.

We arrived at 1:30 PM to warm and sunny weather - shorts and a t-shirt! We decided to take a pedicab tour for a couple of hours. It was offered by Susan for $45 per person and was very informative and interesting. Sue is retired from the Coast Guard and had lots of facts and figures during the tour. A very enjoyable way to see Juneau and one we would recommend - she has a cover for her pedicab for rainy days. She can easily be found on the pier or reached by text at 907 255-3662.
After the tour, we walked around Juneau a little more before heading back to the ship.
We dined at “Tamarind” that night - an Asian restaurant with an extra charge of $18.75 per person. This venue is great - not part of any other restaurant or venue, and the food and service were excellent! We made a reservation for Friday night.
After dinner, we watched the film in “Mainstage” - a “BBC World” presentation on Alaska - interesting and very well done. 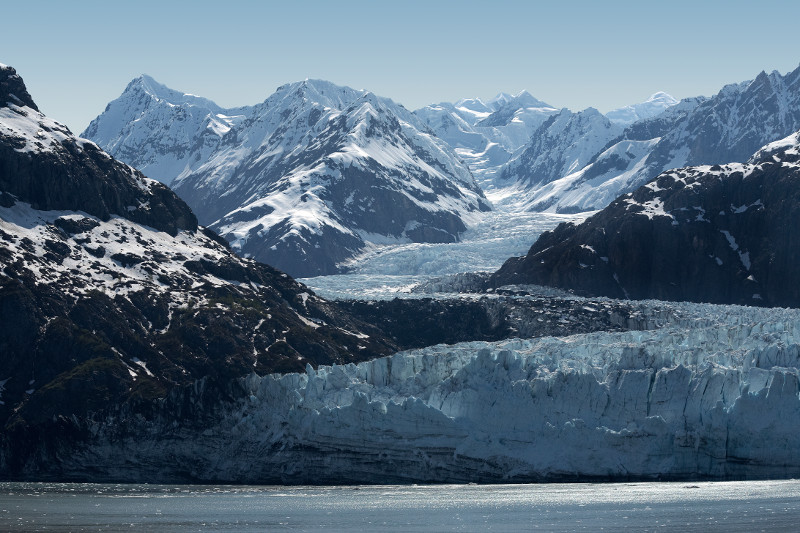 This day is always one of the highlights of an Alaska cruise - even on a cloudy day like we experienced. There were park rangers on board to comment on the scenery and wildlife as we cruise slowly up the inlet. They also pointed out the gradual disappearance of the glaciers in the area. Even the last 15 years has made a very noticeable difference.
The various ships in the area are scheduled so that we didn’t see another one (Ruby Princess) until we were leaving. 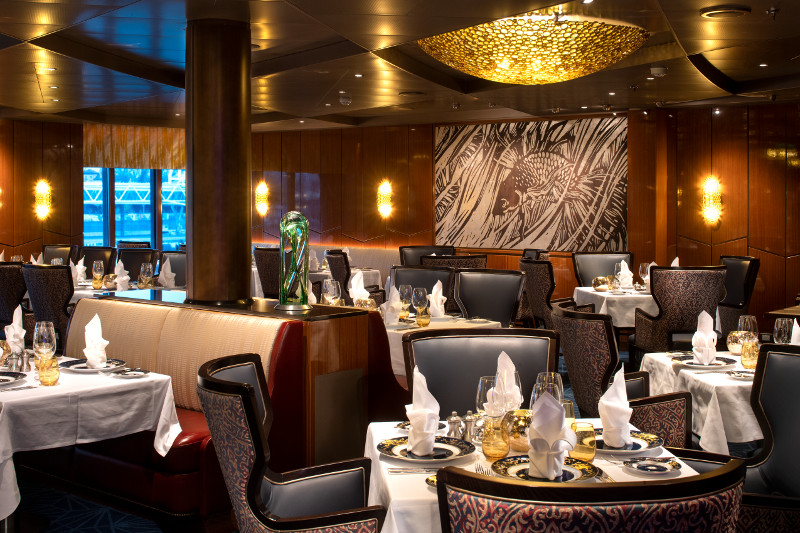 That night we dined at Pinnacle Grill. This is a separate venue with the feel and menu of an up-market steak house. The food and service were exceptional but the extra charge of $35 per person is a little high in our opinion although there is a discount for Mariners which varies depending on one’s status (number of nights cruising with Holland America) 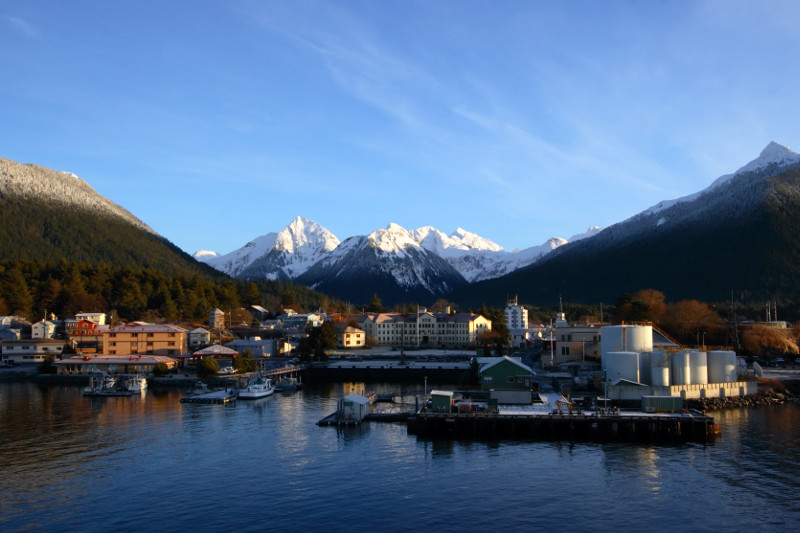 We were the only ship in port which made the village much less congested and enjoyable.
The town centre is about 15 minuted by free shuttle from the pier and at 1:30 we met our group at the shuttle stop for our sea and wildlife tour onboard a catamaran. The boat holds up to 100 passengers so our group of 23 had lots of space and attention from the crew. The 3-hour tour was well done and enjoyed by everyone. We stopped near a whale that was feeding in the area as well as sea lions and otters. The captain and crew certainly knew what they were doing and where to go.
This evening we dined at “Rudi’s Sea De Mer”. Once per week Pinnacle Grill is converted to Rudi’s - no change except for the “French” menu which features seafood.
Once again, the food and service were great but we felt the price of $49 per person was a little high.
The entertainment tonight featured a magician who, as you might expect, was very good and quite funny. 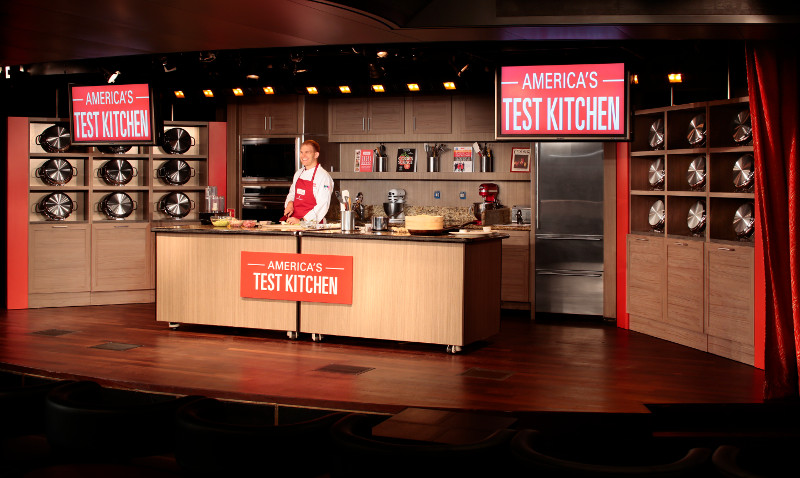 This was a very busy port with 4 or 5 large ships there today - probably 10,000 people. We went ashore briefly to have a look around. The city is very picturesque and well worth the effort - even with the crowds. We sailed in the early that afternoon for Victoria.
We dined in the main dining room - at our table that had been reserved for us on the first night. The meals in the dining
room are fine - it is not really necessary to spend the extra money for the speciality restaurants.
The entertainment tonight was the dancers in a show called “Stages” - disappointing after their performance on the first night.

After spending most of the day at sea, we arrived in Victoria at 6:00 PM. We enjoyed a leisurely dinner in the main dining room and decided not to go ashore, The ships dock at Ogden Point about 15 minutes from the city centre by shuttle - $15 per person which we thought was a little unreasonable.
We skipped tonight’s show which was a combination of the magician and the comedian.

We arrived at 7:00 AM and the disembarkation process was well organized and efficient. We were in our car and on our way by 10:00 AM.
Generally, we were happy with the cruise although, except for the first night, we were disappointed in the entertainment. We think Holland America needs to “up their game” quite a bit in this area. The educational lectures also left us feeling that something was missing. They were primarily talks by the ship’s shore excursion personnel or films by BBC World - good but could be much better.
The organized daily activities were limited to party bridge, trivia, bingo and ballroom dancing, although there were cooking demonstrations several days which seemed to be educational and well attended.
Although there were many children on board with their parents and grandparents, it didn’t seem that there was much for them to do as many of them spent most of their time in the main pool. In spite of Holland Americas children program - HAL, we would recommend a cruise line with more activities for children and teenagers.